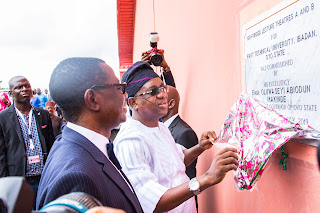 In June 2018, the final month of my first stint as Media Assistant to the Pioneer Vice-Chancellor of First Technical University (Tech-U), Ibadan, Professor Ayobami Salami, Fẹmi Babatunde who had newly resumed as the Public Relations Officer of the University and I did quite a number of things together. As part of one of the programs then, we coordinated a Media Chat that had superbly competent media professionals in attendance. After reeling out what the Vice-Chancellor had been able to do at that time, we conducted the journalists to a construction site to the west of the Library Complex.

The trip to the site in one of the school buses was rather quiet; and on arrival, Professor Salami disclosed to the media men that the Lecture Theater Project was fully Internally Generated Revenue (IGR) funded. While the others took pictures and scribbled away into their notepads, Bisi Oladele, Head, South West Bureau of The Nation Newspapers spoke. Turning to the Vice-Chancellor, he said “Prof, it’s like God has ordained you to be the Hezekiah Oluwasanmi of this place. You know what Professor Oluwasanmi did in Ife”. Typical of him, Professor Salami simply smiled and reentered the bus, ready to return to his desk for the remaining part of the day’s work.

Interestingly, in her welcome address at the inauguration of Tech-U’s second Vice-Chancellor on 9th May 2022, the Registrar of the University, Mrs. Olayinka Balogun also likened Professor Salami to Professor Oluwasanmi. “History will indeed be kind to Professor Salami and in years to come, he will be mentioned among pioneers, game-changers, and men who laid foundations for great and mighty things to flourish. I mean the likes of Professors Kenneth Onwuka Dike, Hezekiah Oluwasanmi, and our dearly beloved Oyewusi Ibidapo-Obe”, she said.

Speaking further, Balogun recalled that “Professor Oluwasanmi was the second Vice-Chancellor of the University of Ife (as it then was). He was famous for relocating the University from Ibadan to its permanent site in Ile Ife”. She went on to reveal that “In his wisdom, Professor Salami declined an offer to start Tech-U from a Temporary Site at Ajoda and opted to start the Permanent Site from scratch”. She also averred that “under his watch, not only did First Technical University, Ibadan metamorphose from a University with just two buildings into a bastion of knowledge whose buildings can no longer be counted on fingertips, a culture of excellence has been established in the institution”.

Aside from the conspicuous infrastructural development, the Pioneer Vice-Chancellor oversaw the admission and graduation of Tech-U’s first set of students. He mentored them, not just with his physical presence which the Tech-Uites graciously enjoyed but with intellectual development as well.

Anchoring the orientation program of the pioneer set in January 2018 provided ample opportunity to witness Professor Salami’s first interaction with the students. While I was wondering how lucky the students were, especially getting to see the Vice-Chancellor on their first day in school, he handed them pieces of paper with an assignment to solve. After the assignment, he told them the task was to make them think outside the box. Having made them understand that at Tech-U, they would need to think outside the box to make a difference, Prof didn’t mince words in telling them that thinking without the box was a far better option! The students thus realized the need to widen their horizons from Day One.

By the second week, when students in the pioneer set rounded off their Entrepreneurship Orientation, I became doubly convinced that the Vice-Chancellor’s interaction had already made an impact on the freshmen. I was coming behind Professor Salami when he met students who had just arrived from a Machine Tool company at Podo, Ibadan on an excursion. When he asked what the experience felt like, the lad who spoke on behalf of the others said “we have seen that we have no reason to fail. We have no excuse”. With a broad smile, Professor Salami said “I like that” as he wished the students well and walked on.

It is essential to remember that Professor Salami did not just start the University, he nurtured it with every ounce of strength and passion. And under his watch, Tech-U became a force of reckoning. Tech-U’s webometric ranking shocked many, the element of surprise was that a young university was ranked higher than many older citadels of learning. And within four years of opening its doors to students, the institution was ranked 7th best among state owned universities and 27th among the 113 ranked all over the country.

A goal-oriented person, Professor Salami initiated alliances with universities abroad. Thanks to the Memorandums of Understanding signed during his tenure, Tech-U students can undertake exchange programs with Texas Technical University, Girne American University, and the University of Florence in the United States, Cyprus, and Germany respectively. And with Tech-U’s uninterrupted academic calendar, students are sure of when they will graduate.

It would not be wrong to say Professor Salami moved the Tech-U train from the station and five years on, the train is on the course enroute to its destination. One of the things the institution has in its favor is the University’s first-rate workforce. In his address at the Ibadan House where the Central Council of Ibadan Indigenes and members of staff of the University who are of Ibadan extraction hosted him for an end-of tenure reception, Professor Salami described the university’s workforce as a set of people willing to go the extra mile hence the “top-notch” service delivery.

Professor Salami, by reputation as a great leader with demonstrable character. Not only would he roll up his sleeves and get to work where and when necessary, but he has also proved his mettle as a precision-driven manager of resources; human and material.

Though the Pioneer Vice-Chancellor indeed found the path, charted a course, and laid a foundation, his successor, Professor Adesola Ajayi is equally a man of great depth. Little wonder the Registrar, Mrs. Balogun described him as “a scholar of genuine quality, a stickler for excellence and a first-class brain with significant experience in tertiary education administration”. Not only did she attest to the new Vice-Chancellor’s “undiluted commitment to the development of First Technical University, Ibadan” she likened him to “the biblical Elisha who got a double portion of the anointing of Elijah, ran with it and performed greater works than Elijah”.

With a man like Professor Ajayi who has been welcomed to a “Season of Greater Works” at the helm of affairs, Tech-U can only get better. Moreover, he has promised not to tamper with the Master Plan of the University.